ASAP Ferg Net Worth: ASAP Ferg is an American rapper, singer, songwriter, and actor from Harlem, New York City, who has a net worth of $8 million as of 2022. The rapper is best known as a member of the ASAP Mob a hip-hop collective group.

Ferg made a name for himself as a solo artist as well as being part of the hip hop collective with whom he grabbed the attention of several labels and eventually signed a record deal with Polo Grounds and RCA. This popular collective rose to fame after releasing their first studio album Cozy Tapes Vol. 2: Too Cozy, which hit the US Rap album charts peaking at the 3rd spot.

Ferg’s work remix would go on to get millions of views and land him the 2013 BET Hip Hop Awards in the category of Rookie of the Year. Outside of music, he also appeared in a handful of movies and TV shows. Moreover, ASAP Ferg is the founder of the street fashion and lifestyle brand called Traplord.

ASAP Ferg was born on the 20th of October 1988 in Harlem, New York, to Trinidadian parents. His real name is Darold Durard Brown Ferguson Jr., who later adopted the stage name of ASAP Ferg. His father Darold Ferguson was a successful graphic designer and was the owner of a local Harlem-based boutique. Sadly working in the print shop and inhaling paint fumes, resulted in his early death from kidney failure.

Ferg followed the footsteps of his father and became a fashion designer as he launched his merch and jewelry lines in his early teens. Later he expanded his businesses and began selling high-end belts with the launch of  Devoni Clothing in 2005.

The area he grew up in is known as Hamilton Heights which became one of the main distribution ports for moving massive amounts of cocaine throughout the area. Ferg was enrolled at the Our Lady of Lourdes, a Catholic elementary school, and then earned a major in design, fashion, and fine arts from the High School of Art and Design in Manhattan.

Moreover, his dad screened shirts for all kinds of record labels and designed the logo for Bad Boy Records. This is an experience that left young Ferg with the impression that the Bad Boy Logo had somehow been inspired by him. ASAP was in action even working with his father and learning the tricks of screening shirts.

His father was equal parts business and street smart and was part of the same gang, a crew that pretty much Ran Harlow. After the death of his father, Ferg continued his passion and he put a hundred percent into it. While studying at Bayard Rustin High School he met fellow artist Jay West and the two began spending hours working together on painting and screen printing t-shirts.

He even went to high school with ASAP Rocky and the two shared an appreciation for artistic fashion. On top of studying in college at the age of 17, ASAP Ferg launched his clothing and jewelry line called Devoni Clothing. That business became successful and it was a high-quality designer belt that would go on to be worn by some high-profile artists like Chris Brown.

His high school friend ASAP Rocky saw his success and asked him to come on as a designer for the hip hop collective A$AP Mob. Ferg agreed and not long after he joined Rocky told him to focus more on the rap games. Soon Ferg and Rocky began collaborating on tracks such as Get High, Ghetto Symphony, and Kissin’ Pink.

ASAP Ferg has always been interested in being a fashion designer since his teenage, so he decided to launch his own lifestyle and fashion brand called Traplord namesake of his first album, which he founded in New York City in 2012.

The brand is known for offering several products including snapbacks, camouflage-print clothes, as well as bucket hats. To expand Traplord Ferg partnered with some high-profile fashion names such as Culture Kings, Young & Reckless, and Virgin Mega.

ASAP Ferg released his debut single Work on August August 28, 2012, and the official music video quickly got over 2 million views as of now the video has over 121 million views on YouTube. The song was featured in the A$AP Mob mixtape titled Lords Never Worry.

In January of 2013, Ferg signed a record deal with RCA Records and Polo Grounds. Later that year he was nominated at the BET Awards for Rookie of the Year. In August of 2013, the rapper eventually dropped his debut studio album Trap Lord. To record the album he teamed up with popular artists including Waka Flocka Flame, B-Real, French Montana, and of course ASAP Rocky.

Ferg gained early recognition with the release of that album debuted at #9 on the Billboard 200. Hood Pope, Shabba, and the remix of Work became the supportive tracks for the Trap Lord. 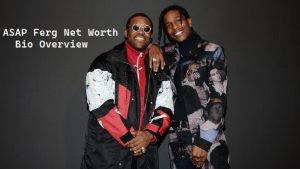 At the end of 2014, Ferg came up with the release of his first mixtape Ferg Forever. Features guest appearances by such artists as M.I.A., Twista, Big Sean, Wynter Gordon, and many others.

The album became a commercial success and peaked at number two and number eight on the US Top R&B/Hip-Hop Albums (Billboard) chart and the US Billboard 200 chart, respectively. New Level, was the first single released from the album and it came up as Ferg’s highest-charting song to date, reaching #90 on the Billboard Hot 100.

ASAP Ferg collaborated with artists Lil Yachty, Migos, Busta Rhymes, Snoop Dogg, and Meek Mill, to record his 3rd studio album Still Striving which was released in 2017. Another track Plain Jane became the album’s supportive single and it peaked at #26 on the Billboard Hot 100, becoming his newest top-charting song. Later that year, the popular artist Nicki Minaj contributed to the remix version of the song.

As a solo artist, Ferg continued to release more music like the 2019 extended play Floor Seats as well as the 2020 mixtape titled Floor Seats II. The later drop spawned the track Move Ya Hips, ft Nicki, and MadeinTYO.

Work with other Artists:

After being successful with his debut album Trap Lord Ferg grabbed the attention of numerous other artists who later began collaborating with him for their music. The singer Ariana Grande asked her to be featured in her song  Hands on Me, in 2014.

That same year he made his appearance as a featuring artist on several tracks including “Lotta That” by G-Eazy, “Don’t Wanna Dance”, “My Song 5, by Elie Varner, and “Whiteline” by the rapper Crystal Caines.

He also made his featuring appearances in songs including “That Damaged Girl” by SEVDALIZA, “Say it Again” by Onefour, “Bezerk” by Big Sean, as well as Octavian’s “Lit”, and DJ Premier’s “Our Streets”.

In 2016 Ferg and rapper Playboi Carti teamed up for the 23-stop Turnt & Burnt tour which became their super successful tour and the rapper garnered a good sum from there.

He appeared as himself in an episode titled The A$AP Ferg Show of the American surreal sketch comedy television series The Eric Andre Show in 2020. In the following year, he guest starred as Himself in an episode of the Netflix reality series Nailed It!.

ASAP Ferg is quite private about his relationship life and the rapper hasn’t disclosed any information about his girlfriends or any dating history. So it is hard to say whether Ferg is dating any girl or not.

ASAP Ferg can afford his expenses and he likes to live a luxurious lifestyle. In 2019 he moved into a beautiful mansion which is located in one of the posh areas in New Jersey, the United States. This house offers a lot of artwork with expensive paintings.

As of 2022, ASAP Ferg Net Worth is estimated to be around $8 million. He is one of the most prominent rappers in the country and has released a handful of hit music throughout his successful career.  Ferg is known for releasing his second album Always Strive and Prosper, which became a hit and earned him a lot of fame all around the globe. He earned recognition in both the music and entertainment business.

The main source of his income comes from releasing albums, live shows, and international tours. A hefty amount of his revenue he earns from brand endorsements, television commercials, as well as promotional campaigns.

Ferg teamed up with Hennessy a popular whiskey label for their promotional movement in 2017 that brand also endorsed his new single, Family. Ferg has a YouTube channel where he has almost 1.8 million subscribers.

Is ASAP Ferg is a millionaire?

ASAP Ferg Net Worth is approximately to be around $8 Million.

How much money does ASAP Ferg make in a year?

ASAP Ferg is making more than 1 million dollars in a year.

How old is SSSniperWolf?

What is the real name of ASAP Ferg?