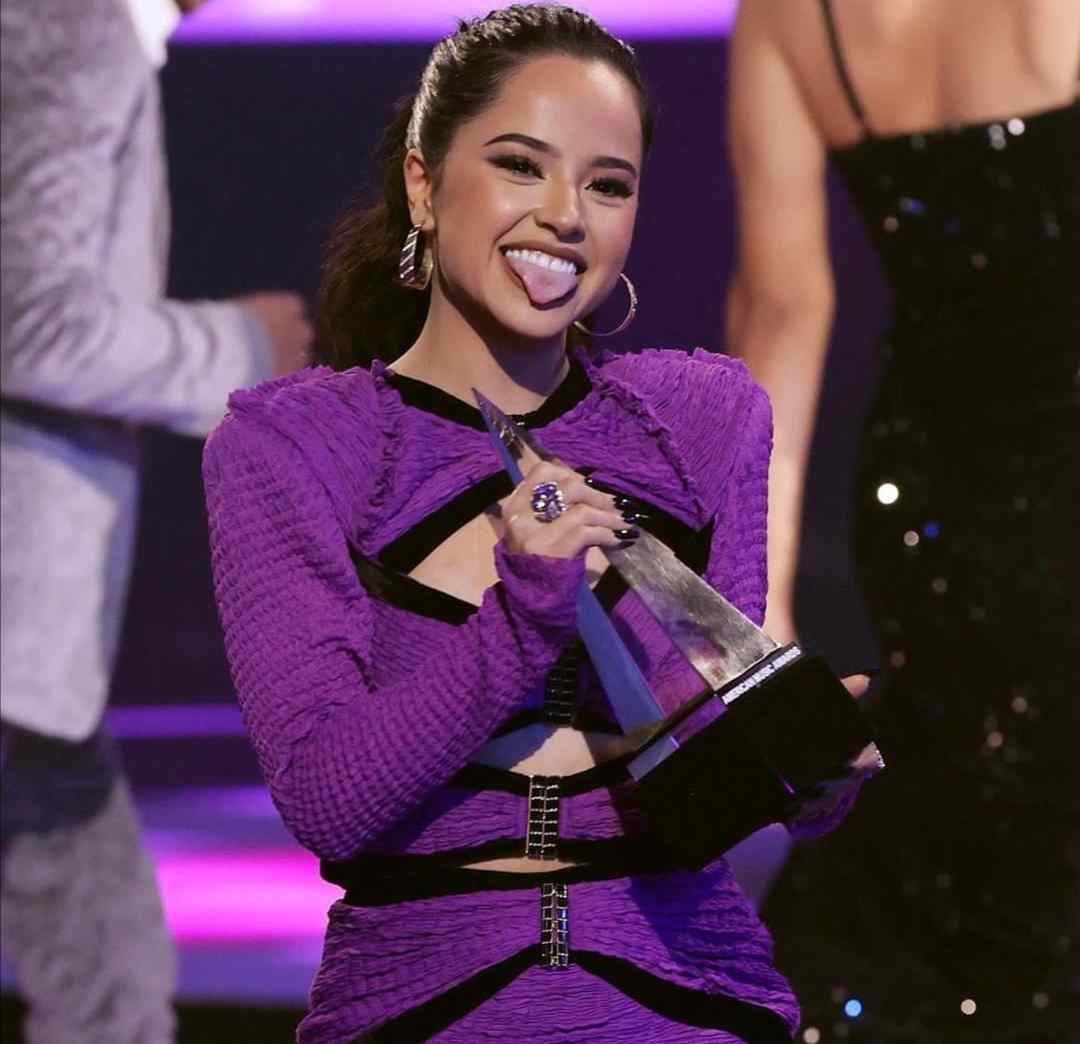 Becky G Net Worth: Becky G is an American singer-songwriter, rapper, model, dancer, and actress who has a net worth of $8 million.  She got her first big break when she was discovered on YouTube at the age of 14. But that doesn’t mean success happens overnight for Backy. She is a singer who gained a lot of fame at an early age by releasing the covers of popular songs on her YouTube channel.

It was in 2013 when Becky G dropped both her debut EP, Play it Again, and her debut single titled Becky from the Block. She rose to fame after releasing her breakthrough single Shower which went viral toping 20 on the Billboard Hot 100 as well as amassing over 460 million views on YouTube.

Becky G once again came to the mainstream when she dropped hit singles, Problem (The Monster Remix), and Oath, which also breakthrough on the Billboard Hot 100. Apart from releasing songs, Becky also earned a lot of success in the entertainment industry as an actress. She appeared as Trini Kwan / Yellow Ranger in the 2017 superhero film, Power Rangers. In this article, we are going to discuss the total net worth of Becky G her salary, luxurious lifestyle, and some interesting facts.

Becky G was born as Rebbeca Marie Gomez on March 2nd, 1997 in Inglewood California. Her four grandparents are originally from Jalisco, Mexico, but her parents are born in the United States.  She is the daughter of Alejandra “Alex” Gomez and Francisco “Frank” Gomez, who are only 18 and 19 at the time of her birth. She has three younger siblings Frankie and Alex had a sister named Stephanie.

Growing up in Inglewood, Becky has fond memories of playing football, and baseball, putting on talent shows, and running through her Sprinkle with her younger siblings. While attending Elementary School she participated in the after-school dance team. She cites Jennifer Lopez, Christina Aguilera, Thalía, and Selena as her biggest musical influences.

When she was 9 years old, the family house burned to the ground with nowhere else to go her parents had to move their rather large family into the garage of her grandparents’ house in Moreno Valley. It was then at the age of 9 that Becky knew that she had to do what she could do to help her family’s situation. She found an agent and begin working as a model and actress doing commercials And doing voice-over work. She went to study at a public school but transitioned to homeschool due to bullying issues.

In 2008 she landed a role in the short film El Tux, playing Claudia Gómez, Then she landed another part in the TV movie for the discovery Channel La estación de la Calle Olvera. After dropping out of Public school, the extra little time allowed Becky to pursue more work and she got involved with the girl group called G.L.A.M. The four G.L.A.M girls would film all their rehearsals, performances, and music videos. Becky G later worked with another girl group known as “BCG”. By 13, she had learned to play the guitar and how to rap.

Her next project came along in 2011 when she hooked up with the duo of “The Jam“. The Jam operated as her production company and rating partnerships as she put together covers of hip-hop and pop songs that were trending. There was a Kanye West and Jay-Z’s Otis, Eminem and Bruno Mars’ Lighters, Frank Ocean’s Novacane, Drake’s Take Care, and an original song Turn the Music Up.

Her plan was for all these songs to become her mixtape but it was her version of Otis that caught the attention of DR Luke. This legendary producer had worked with Miley Cyrus, Kary Perry, Britany Spears, and Nicki Minaj and knew right away that Becky G was a huge star. The producer signed her to his record label called Kemosabe, which works with RCA records. While working on her debut album, Becky would started to collaborate with other artists will.i.am, Cody Simpson, and Cher Lloyd.

In 2013, she released her own debut single, Becky from the Block, which is the cover of Jenifer Lopez’s 2003’s track Jenny from the Block. Becky asked Jenifer Lopez for permission to make her version of the song. Jaylo also made a cameo in her music video. In May of that same year, she released her promotional single Play It Again, from her debut album, and in July 2013 she premiered an EP under the same name, which consisted of four unreleased tracks including the song, “Can’t Get Enough, with the collaboration of Pitbull. The song became a hit topping the Latin Rhythm Airplay chart in the US.

Finally, on April 23rd, 2014, Becky G released “Shower” the first single from her debut album which ended in the top 20 on the Billboard Hot 100 and received the Multi-Platinum certification from the Recording Industry Association of America (RIIA). That song became the biggest breakthrough moment of her career and she earned a lot of fame as well as this track received prominent play in countries including Australia and Sweden. She also joined Katy Perry’s Prismatic World Tour (2014), traveling to both Mexico and the United States.

If that were enough she also became an official CoverGirl model, featuring the brand in her music videos as well as filming commercials. After her single Shower’s success, in March 2015 she released the remix version of Can’t Stop Dancin‘ in a collaboration with Jay Balvin, from there the two would go on to tour together. 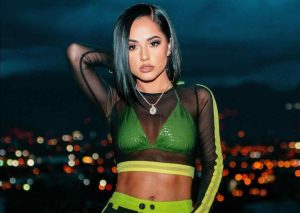 In 2016, Becky released Sola, the first single from her debut album which was sung entirely in Spanish and she participated in the track titled “superstar” with Pitbull. In October of the same year, she premiered Mangú, her second single in Spanish. She then continued to explore the industry of Latin music, polishing on her Mexican heritage and her love of late Tejano artist Selena.

She dropped the track “Todo Cambio” in February 2017 and teamed up  with Argentine singer Axel on the track titled “Que Nos Animemos.” On July 13, 2017, she launched her most successful song in the video “Mayores“, a collab with the Puerto Rican rapper Bad Bunny. The song immediately went viral topping the charts in different countries including, Spain, Chile, El Salvador, and Ecuador, and hit # 3 on the Billboard Hot Latin Singles chart.

This massive successful single Mayores led her to become one of the most popular singers in the American music world and she began collaborating with some legendary artists. She teamed up with singer Leslie Grace on the single Díganle, and then with Lindsey Stirling on the Christmas album titled Warmer in the Winter.

Mad Love was the hit single of David Guetta and Sean Paul, in which she was featured and joined Natti Natasha for the track Sin Pijama. On top of that Becky G collab with some other artists such as Kane Brown, Maluma, Paulo Londra, and Joss Favela. Becky released the collaborative sing Booty with Spanish singer C. Tangana, which went viral, peaking at $3 in Spain as well as earning platinum certification in the US.

After releasing some hit Spanish songs, Becky G made her return to English-language music in 2019. She dropped some tracks such as LBD and Green Light Go. She continued to collaborate with other artists for singles including, Maluma’s La Respuesta, Myke Towers’ Dollar, as well as Zayn Malik’s bilingual version of “A Whole New World,” featuring on the soundtrack to Disney’s fantasy film “Aladdin” remake. At the end of 2019, Becky G made her featuring appearances on Akon’s hit track Cómo No and J-Hope’s multilingual single titled Chicken Noodle Soup.

Becky finally came up with the release of her debut studio album entitled Mala Santa, on October 17, 2019, under RCA Records, Kemosabe Records, and Sony Music Latin labels. For this project, the guest appearances came from artists such as Farruko, Mau y Ricky, and Darell. The album was a massive hit, ranking in the top 3 of the Billboard Top Latin Albums chart as well as #8 on the Spain Streaming chart. Becky continued to collaborate with singers Carlos Rivera, Gente de Zona, Ozuna, and many others.

In 2015, Becky G played the role of Valentina Galindo in two episodes of Empire, the television musical show to which she also contributed with two songs for the soundtrack. She also starred as herself in episodes of the television series “Teens Wanna Know,” “Tu día alegre,” in 2014, and “Austin & Ally in 2015.

2017 was another huge year for Becky G, she starred in the movie Power Rangers, where she played Trini Kwan / Yellow Ranger. Her outstanding performance in the movie earned her so much recognition in the entertainment industry and she began getting offered more acting projects. She then played the role of Sara Reyes in the 2018 science-fiction adventure movie A.X.L. She also had the lead role of Chloe in the animated fantasy movie titled Gnome Alone alongside actor Josh Pack.

In April 2015, Becky G and singer Austin Mahone started dating but shortly after the two split in August of that year according to the reports in Hollywood Life.

In the following year, Becky began her relationship with the soccer player Sebastian Lletget. The couple was spotted together at several parties and occasions ever the football player Sebastian had uploaded their pictures together on Instagram on May 31, 2016. 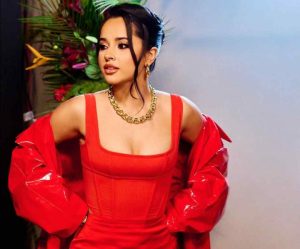 As of 2022, Becky G Net Worth is estimated to be around $8 Million. She is one of the top rising singer-songwriters in the American music world and has released numerous hit music in a collaboration with some high-profile artists. Becky G would have four songs breakthrough on the Billboard Hot 100 including Shower, Oath, Can’t Stop Dancin, and Mayores. The song Mayores amassed more than 2 billion views on YouTube. She also landed work as an actress on Empire and take on the role of Trini Kwan / Yellow Ranger in the Power Rangers movie.

She gained massive popularity after touring and collaborating with artists like Will.i.am, Justin Beiber, Katy Perry, Bad Bunny, Jay Balvin, Cody Simpson, JLO, and more. She first grabbed the attention of a large audience with her YouTube channel where she uploads her music videos and gathers billions of views on almost every single. Becky G has managed to amass over 20 million subscribers on her YouTube channel which is a great achievement for her and because of her success, he net worth is growing regularly.

The primary source of her income comes from various sources including the music world, album sales, live concerts, international tours, hit music, her YouTube channel, as well as endorsement deals. With all that success, Becky was able to buy her parents a new home in the luxurious place of Los Angeles, California. She became the brand ambassador of PrettyLittleThing in early 2020. Furthermore, she appeared in the commercials of some big names such as McDonald’s, and CoverGirl, as well as she, has done commercial work for Disney Channel and Nickelodeon. Becky G’s annual income is over $1.5 million.

What is the net worth of Becky G?

How much is the salary of Becky G?

What is the age of Becky G?

Rebbeca Marie Gomez was born on March 2nd, 1997 in Inglewood California, she is 25 years old.