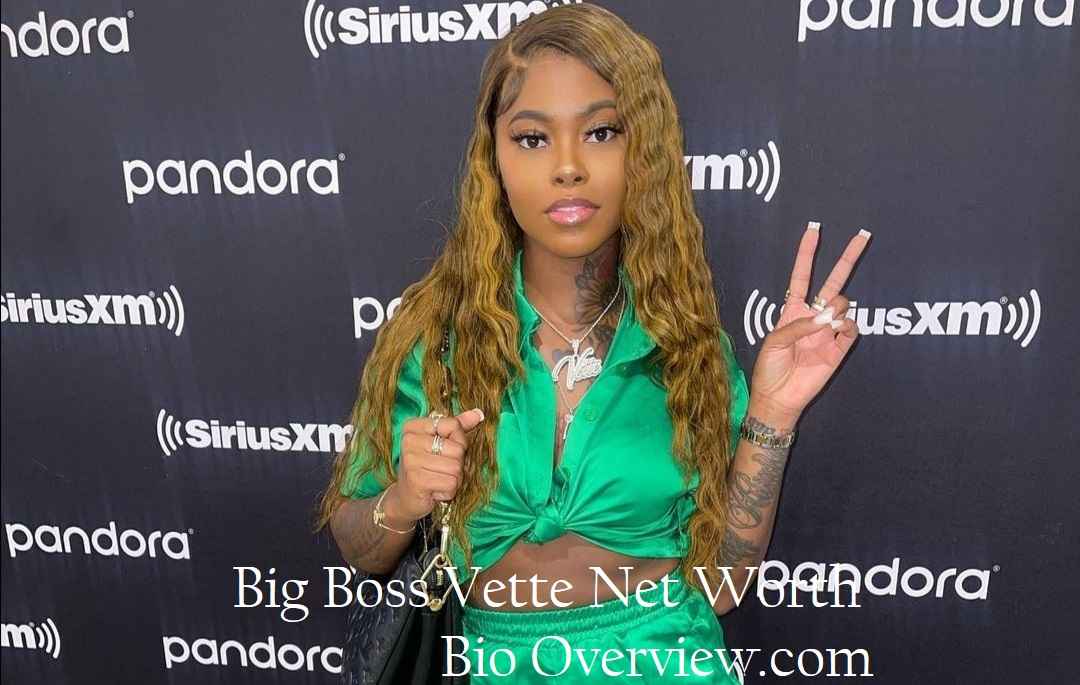 Big Boss Vette Net Worth: Big Boss Vette is an American rapper who has a net worth of $1 million US as of 2022. She is the bright, blunt, and bold force that hip-hop needs right now. Thanks to some unapologetic lines, distinct style, a ratchet vibe, and a scintillating flow, this St. Louis native is taking over the rap scene and demanding everyone’s attention.

After getting over 30 million streams and going viral on social media especially on TikTok with her hit single “Outside”, this capable young lady grabbed the attention of several labels and eventually signed a deal with Republic Records to go from a social media freestyler to a significant influence in the music industry.

Big Boss Vette gained further recognition for releasing hit singles such as “Make ‘Em Mad,” and “Snatched,” which helped her to become one of the top rising female rappers in the country. So in this post, we will cover all about the total net worth of Big Boss Vette her income sources, career, biography, lifestyle, and a lot more.

Big Boss Vette was born on the 16th of October 1997 in St Louis, Missouri, at this point she has kept her government name to herself although she has hinted that her first name should be Diamond. She developed an interest in music from a very early age.

Vette’s father was incarcerated when she was only three years old while her mother worked all day long as a daycare teacher, so she spent most of her childhood with her grandmother. Her mom remarried and this led to her family growing larger. At this time of her life, she decided to become a rapper but she also worked at a retail store and did service jobs and restaurants among others.

Big Boss Vette started her musical career by posting freestyles on social media like Facebook while attending high school, remixing other rappers’ popular tunes, and making a considerable viral impact for herself. She first began posting under the name Vette before finally altering the name Big Boss Vette. As she pushed forward in her career Vette continued to upload the social media regularly.

Soon enough her remixes and tracks on YouTube started getting the attention of an even larger audience. A year before her big breakthrough she lost her best friend and a cousin. In 2019 Vette finally released her first original single titled “Why You So Mad,” and quickly followed that up with her first hit single “Ratchet Twerk.”

By 2021 Vette had managed to pick up the pace even further. She re-released an older trap record with the single entitled “Dog As n***a.” Big Boss Vette had done more than enough on her own to grab the attention of labels and she wound up signing a deal with Republic Records. Under the label Vette dropped her first single “Eater,” and then she followed that up with her biggest hit yet titled “Snatched.”

The song became a viral sensation that has been reposted by many on Tik Tok. On top of that, the song became the turning point of her career and the official music video of the song amassed more than 3 million views on YouTube.

Vette first gained the attention after releasing the cover of Dej Loaf’s hit single “Try Me” in 2015 which went viral and earned her a lot of fame. Big Boss again came to the spotlight after dropping tracks like “Make ‘Em Mad” and “Outside”, which earned thousands of streams on Spotify. Vette’s highest-streamed track “Snatched” earned 3 million streams on Spotify.

As of 2022 Big Boss Vette Net Worth is estimated to be around $1 million. She is one of the rising female rappers in the country and has garnered a lot of attention in the last couple of years. She started gaining recognition in the year 2019 and since then released many tracks which led her to sign a deal with Republic Records.

The majority of her income comes from the music industry and it seems like in the upcoming years her net worth and popularity will surely be increased. Bigg Boss Vette uploads her music videos on her YouTube channel and garners millions of views on her songs.