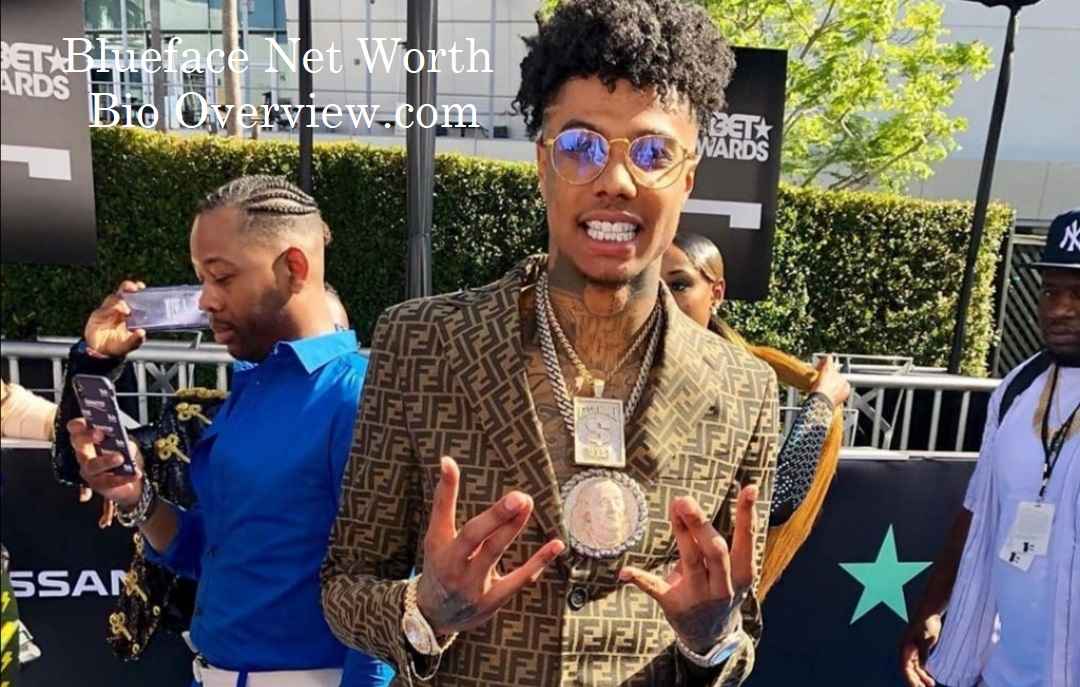 Blueface Net Worth: Blueface is an American rapper and songwriter from Los Angeles, California, who has a net worth of $5 million as of 2022. He has gone from an unknown rapper, to debatably the hottest new artist in the music world.

Blueface made a name for himself after his early School Yard Crips gang ties, catapulted from local Los Angeles obscurity to hip-hop stardom thanks in large part to his ubiquitous 2018 single, “Thotiana”  (featuring Cardi B and YG). The song became one of the biggest hits of his career by reaching number 8 on the Billboard Hot 100 as well as earned “Gold” status by RIIA and RMNZ.

Blueface gained massive popularity in the hip-hop world after collaborating with many high-profile artists such as Cardi B, G-Eazy, Rich the Kid, Lil Tjay, and French Montana. Before that, the rapper had laid the vital groundwork with tracks such as “Respect My Crypn”, but unlike with “Thotiana”, none of those singles had rappers like YG or Cardi B featuring on their remixes.

Following his impulsive ascendance to worldwide stardom, Blueface appeared poised to become one of the biggest rappers of recent memory. Despite this, he also found himself in a series of legal issues throughout his career which we will be talking about in this post and a lot more.

Blueface was born on the 20th of January, 1997, in Los Angeles, California, his real name is Johnathan Michael Porter better known by his celebrated names such as Blueface, Blueface Bleedem, or Young Man Cryp’n. His mother’s name is Karissa and Blueface also has a sister named Kali.

After the divorce of his parents, Blueface relocated multiple times over his childhood, including being shuttled back and forth between California and Ohio. Finally, however, things began to settle down a little bit when he was a teenager and he moved in with his mom in the Santa Clarita Valley.

In this new place, Blueface began to pursue a career in acting. That was the time when his mother took him to her auditions and eventually Blueface even secured some gigs for himself. Upon falling in love with the sport of football he put his acting aspirations to the side and began always switching high schools in search of the best possible sports program.

He wound up settling into Arleta High School, during his senior year the team won 8-4 and averaged around 40 points per game that season with Blueface acting as the team’s starting quarterback in 2014 standing at 6’4” and weighing 160 pounds. After his high school graduation, Blueface moved to North Carolina to play football in college.

He left his mother behind in California and it was a short stint that went nowhere. He returned to his mother’s house in Los Angeles before long. Once back home in California Blueface turned himself into a stay-at-home father, caring for his young son named Javaughn while his girlfriend went to work.

Around this time he considered multiple career paths that he might embark on such as becoming a barber. He wound up operating an Instagram profile called the “Fade Room” that showed off the haircuts on social media.

At the beginning of his rap career Blueface had no idea what kind of music he should make, he simply heard his voice played back to him through speakers. In September of 2017 Blueface’s rap career eventually started when he posted a handful of singles to his SoundCloud profile. Each of that songs was with a different style and feel.

One of his singles titled Deadlocs went viral and earned him some early recognition. After uploading this song to SoundCloud he set goals for himself with daily play count totals, he soon picked up a camera and began shooting his music videos. Around this time he also adopted the new moniker of “Blueface Bleedem”.

He also started posting his music videos on his Instagram profile, asking which high school students were following him the most. After getting some results he quickly drive to that school and performed a concert on top of his car.

By June of 2018, Blueface decided to expand his music career and was finally ready to drop his first full-blown EP titled Famous Crypn. The EP included the hit singles such as Fucced Em and Freak B. Moreover the project received millions of plays on SoundCloud and also featured another big hit single Respect My Crypn released on October 8, 2018.

The music video for that single was released on WorldstarHipHop’s YouTube channel and immediately went viral propelling his entire mixtape to the number 29 spot on the Billboard 200.

Soon he started getting offers from big labels to sign a deal with them so Blueface eventually signed a deal with Wach 100s record label called Cash Money West in 2018. Wack got to work for Blueface by collaborating with the likes of G Eazy, Tyga, and a host of others to crank out a series of collaborations.

The year 2018 Blueface also dropped his mixtape called Two Coccy for which he teamed up with many other rappers such as NLE Choppa, Lil Tya, G-Eazy, and French Montana.

By March of 2020, Blueface returned to the music and was finally ready to release his debut studio album Find the Beat. In early 2021 he released another hit single “Outside (Better Days)” with OG Bobby Billions.

Apart from music, Blueface also created some other projects including his very own series Blue Girls Club.

In July 2021 Blueface also stepped inside the boxing ring with Tik Tok personality Kane Trujillo and then put the kid on the floor. After winning the fight the real boxer jumped into the ring and tried to throw down with Blueface, so the rapper clocked that guy too.

He also has thrown his hat into the restaurant business buying himself a seafood place named “Blue S Fish & Soul located in his old neighborhood of Santa Clarita, California. That was the first-ever business investment that Blueface made.

One day he was randomly walking into his restaurant while waiting on a rental car after another one of his rides was stolen. Upon discovering the place he found that it was for sale and he felt like everything that happened that day had been leading to this moment, as a result, he put down the money and bought the place then in there.

Blueface has managed to transform some widely controversial lyrics into the beginnings of an internet phenomenon.  In November 2018 Blueface was arrested for assault with a deadly weapon. He was charged with shooting at an occupied vehicle, he eventually found himself released on $50 thousand bails days later.

About four months after that he’d find himself with the law yet again in Feburary 2019. This time he was arrested for felony gun possession after he was spotted carrying a large amount of cash and jewelry in an area of Los Angeles.

When officers approached him he was with his crew and all of them quickly scattered throwing their weapons away from the fleeing scene. He was arrested and was out of bail after paying $35,000. At the end of 2019 criticism was tossed away after a video emerged online of him throwing money off the roof of his car as he made his way through LA’s street.

Blueface has been in a relationship with many ladies throughout his life. Blueface and a woman Jaidyn Alexis are in a romantic relationship. The rapper also began dating Jiggy and the two often share their pictures on social media.

In 2017 Blueface became a father of a son named Javaughn. His son can be seen on his Instagram stories and videos. 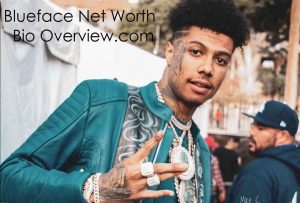 The rapper Blueface has a net worth of $5 million so he has been able to buy luxurious properties for himself.

Blueface is an up-and-coming artist/hip-hop star who has found himself living a wealthy life. With that comes luxury homes and a celebrity mansion. Blueface expanded his bank account after releasing a bunch of hit music. He bought his first home at the young age of 22. Since blowing up pretty fast he afforded himself a lavish property in California.

According to the report his home’s worth is estimated at $1.1 million and the 2-car garage house is the size of a small mansion. The house is located in the beautiful area of Santa Clarita, California which is where he lived at one point with his mother when he was a teenager. Moreover, the house spans over 4,290 square feet with two floors and features 5 beds and 4.5 baths.

Johnathan Michael Porter, well known by his celebrated name Blue Face, is a Los Angeles-based rapper and songwriter. The rapper is most known for his hit single “Respect My Crypn,” which went viral on the internet and twisted him into a meme. That song was uploaded on WorldstarHipHop’s YouTube channel and it garnered a lot of fame for himself.

He also makes a lot of money on YouTube and has collaborated with well-known rappers in the United States, including Drake, Lil Uzi Vert, Quavo, Cardi B, and YG among others. Blueface’s annual income is more than $800,000. The main source of his income comes from the music industry as well as brand endorsements and various businesses.

Blueface is quite active on social media and has endorsed many brands such as FashionNovaMen. Blueface has almost 2 million subscribers on his YouTube channel as has half a million followers on his Instagram profile.

What is the age of Blueface?

How much do the Blueface have in his account?

Blueface's Net Worth is currently $5 million.

How much do Blueface is making?

Blueface's yearly income is over $800 thousand.