Hilary Duff Net Worth: Hilary Duff is a famous American actress, fashion model, singer, songwriter, and entrepreneur, who has a net worth of a whopping $25 Million as of 2022.

She started her career at a young age and soon rose to fame as the title character of the television series Lizzie McGuire which ran from 2001 to 2004. After getting massive success in her role, she got offered many big projects in both the television and film industry.

In 2003, Hilary gained further recognition for her appearance in the theatrical film The Lizzie McGuire Movie which was based on the series Lizzie McGuire. This catapulted her name into the spotlight and was the basis for all of her future acting endeavors.

Apart from making a big name in the acting field, Hilary is also in music as well. So today we will be discussing the total net worth of Hilary Duff her salaries, income, earnings, career, hit movies, biography, luxury lifestyle, and how she spends her millions.

Hilary Erhard Duff was born in Houston, Texas, the United States on the 28th of September 1987. Her father Robert Erhard Duff is a partner in a convenience store chain, while her mother Susan Colleen is a homemaker turned film and music artist. Hilary’s older sister Haylie Duff is a popular actress and singer. She was raised in Houston and San Antonio where her dad’s convenience store was.

Hilary and her sister enrolled in acting, music, and dance lessons at their mom’s encouragement. After appearing in local theater productions, the siblings went on to perform in a traveling BalletMet production of The Nutcracker in San Antonio.

In 1993, the sisters moved to California along with their mother to pursue their careers. For several years, Hilary and Hailey had auditioned and were cast in numerous television commercials and posed for a bunch of apparel companies. At the age of eight, Duff was homeschooled due to her acting career.

Hilary Duff began making her acting career in minor roles including an uncredited role in the Hallmark western miniseries titled True Women (1997) and in the comedy-drama Playing by Heart (1998).

Duff got her first big role as Wendy in the family fantasy film Casper Meets Wendy which was based on the Harvey Comics characters. On January 12, 2001, Hilary was cast as a lead role in the Disney Channel series, Lizzie McGuire.

The actress quickly became a rating success, averaging 2.3 million viewers per episode. Duff has established herself as a teen idol and household name. She started promoting the series through soundtracks, books, dolls, toys, and even video games that were focused on the character. The show’s merchandise alone is said to have brought in $100 million for Disney.

The actress emerged in a video game based on her Lizzie McGuire persona which was released for the Game Boy system. In 2003, Duff appeared alongside Frankie Muniz in the children’s action comedy film Agent Cody Banks. The same year, Duff reprised her role as Lizzie McGuire in The Lizzie McGuire film. After this, she continues to land huge roles in hit movies that did extremely well at the box office.

Some of these include huge Hollywood movies like Cheaper by the Dozen, and Cheaper by the Dozen 2, both of which did intensely well. Duff also starred in the lead role in the romantic comedy film A Cinderella Story. She then appeared in movies such as The Perfect Man and Material Girls where she starred alongside her sister Hailey Duff.

Hilary Duff has managed to earn such massive fame in the world of pop music as she previously gained recognition in the film industry. Duff first came to the limelight in the music world after she dropped her debut studio album, Santa Claus Lane which was released in 2002 under the label Buena Vista and the album sold over 500,000 copies.

In the very next year, she released her second studio album called Metamorphosis which went viral and peaked at top of the Billboard 200 chart in the United States. The album also received a 3x Platinum certification by RIIA. She then released several hit singles and earned a lot of fame in the music world.

In January 2017, Hilary started dating singer-songwriter Matthew Koma, on her 2015 album Breath In, they collaborated extensively. The title track is Breathe In. Breathe Out. is a song he co-write and recorded.

On 8 June 2018, They two revealed, that Duff was expecting her first child together a daughter. Duff ended up giving birth to their first daughter named Banks Violet Bair on October 25th, 2018 and in May 2015 Hilary and Matthew got engaged.

In December 2019, they finally got married and she revealed her next pregnancy on Instagram on October 24th, 2020. Duff’s second daughter named Mae James Bair was born on March 24, 2021. Apart from that, Duff and Koma first met in 2015 while working on Lizzie McGuire’s album Breathe

In. Breathe Out. This was just after one year after Duff’s divorce from her ex-husband Mike Comrie whom with she shares a son named, Luca Cruz Comrie. However, in March 2017, the pair briefly split.

Hilary Duff is one of the richest celebrities in the Hollywood film industry and she loves to spend millions of dollars on expensive lifestyles. She is the owner of a beautiful Georgian-style house which she’s been in ever since she was pregnant with her first child Luca nearly a decade ago.

The lavish house is spread over 5,260 square feet and it featured a massive backyard, a big fountain, and a lot of other things. The cost of a big house is around $3 million. 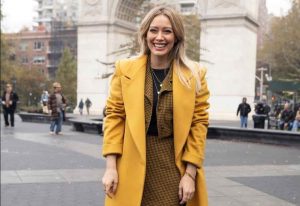 As of 2022, Hilary Duff Net Worth is estimated to be around $25 Million in 2022. She is making a lot amount of money at a very early age, essentially making her a millionaire before the age of 18. The former Disney channel star, Duff has been earning money from TV shows, movies, series, and books, as well as from the music industry.

Ever since she moved to Hollywood at the age of 6 to begin her acting career. She also earned the 72nd spot on the Forbes celebrity 100 list in 2007 for earning $12 million in that year alone. Her first breakout role was in Lizzie McGuire the TV series where Duff played the lead role and charged $15,00 per episode and $1 million for the film.

As per the report of Forbes, Hilary raised $15 million in 2005. So it is no surprise that Duff amassed a net worth of $25 million over the years. Hilary Duff’s annual income is more than $5 million.

Her source of income also comes from brand promotions, she has been endorsing multiple brands including, DKNY Jeans, and Got Milk? With Love… Hilary Duff, DKNY Femme, Wrapped With Love, Candies, and many others.

How old is Hilary Duff?

Hilary Erhard Duff was born in Houston, Texas, the United States on the 28th of September 1987, She is currently 35 years old.

How much does Hilary Duff make a year?

What is the worth of Hilary Duff?

Who is the husband of Hilary Duff?

In December 2019, Hilary got married to singer-songwriter Matthew Koma.

Hey everyone, that brings us to the end of this content, if you liked this where we talked about Hilary Duff Net Worth and her Biography. Then just share this advanced content with your friends and your social media forms, whoever like enjoying the lifestyle and the bio of their high-profile actresses. We like to know your view and we will give a complete full message to you. Thanks.