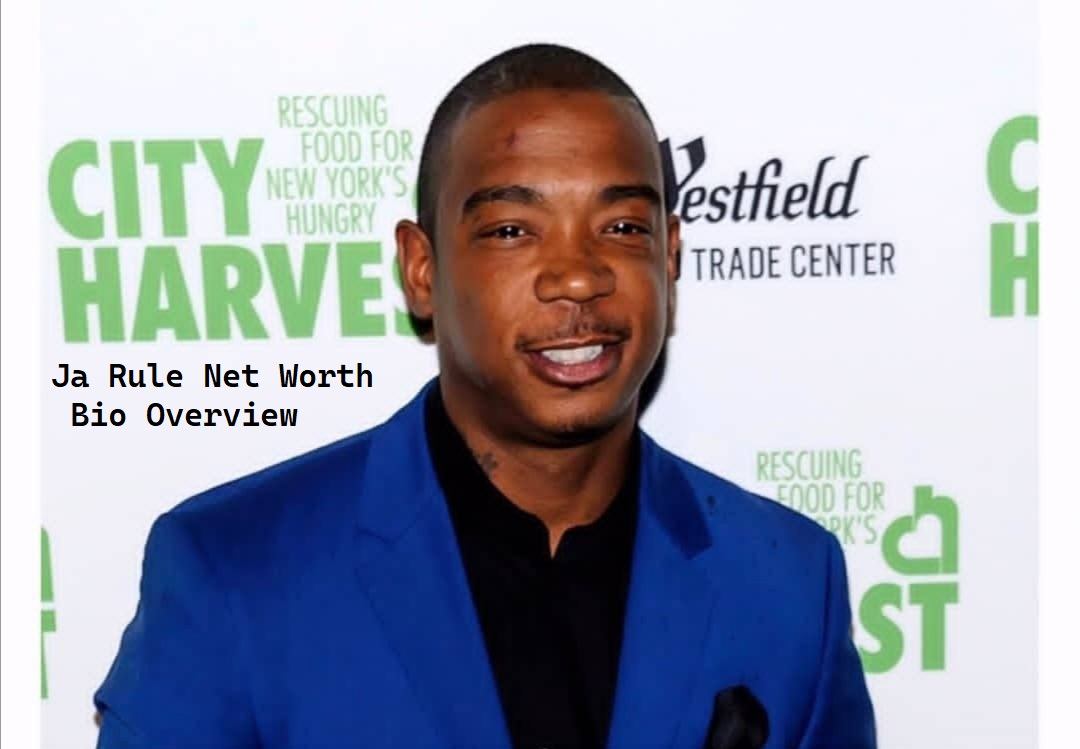 Ja Rule Net Worth: Ja Rule is an American, singer, songwriter, rapper, actor, and record producer, from Queens, New York, who has a net worth of $7 million. He is one of the most highly acclaimed musicians in the music world.

Ja Rule is known for having collaborations with some high-profile artists including Jennifer Lopez, Christina Milian, Ashanti, R Kelly, and many more. He started his career in 1994 and teamed up with Chris Black and O-1 to become a member of their hip-hop group called Cash Money Click.

In 1999, Ja Rule eventually dropped his debut studio album titled Venni Vetti Vecci which became successful peaking at number one on the Top US R&B Albums list. The album’s lead single was later released by Holla Holla which earned him a lot of fame in the industry.

Rule gained popularity after releasing tracks Between Me and You, Always on Time, and I’m Real, which went viral topping the Billboard Hot 100 chart.

Ja Rule has made headlines after releasing a teaser trailer for his upcoming reality TV show, “Celebrity Show-Off” disguised as a low-budget local Greek Restaurant commercial.

He would also begin hosting private house parties to continue making bank during the lockdown and face endless ridicule for his involvement in the Fyre Festival Scandal.

To be honest, public perception of him has very little to do with his music, and a whole lot more to do with the feuds Rule is engaged in with the likes of Eminem and, more importantly, 50 Cent.

These two have been feuding on and off again for close to 20 years now and after Ja released the teaser for his newest television show, fans were already lining up for 50 Cent’s inevitable response.

Ja Rule was born Jeffrey Bruce Atkins on the 29th of February 1976 in Queens, New York. He was born to parents William Atkins and Debra. While living in the neighborhood of Hollis, his mother was a healthcare worker.

Growing up he was part of the Jehovah’s Witnesses faith and practices the religion, which might make you think he is a pretty peaceful man. But the streets of Queens made a fighter out of him.

Ja Rule was 12 years old when he left the religion and he started getting involved in selling drugs in the city. Upon his education, he attended Public School 134 in Hollis where he got into a lot of fights and trouble.

As a result, he was kicked out of school and his mother got him moved to Glen Oaks’s Middle School 172.  Ja eventually completed his General Educational Development (GED) diploma in early 2012.

In 1994 Ja Rule started his music career by becoming part of the group Cash Money Click along with Chris Black and O-1. Around the same time, the rapper decided to change his real name to the stage name “Ja Rule”.

Along with the group, he began producing independent tracks and worked with a number of other artists. In 1994 Cash Money Click dropped their debut son Get Tha Fortune which helped them to grab the attention of TVT records, with whom they signed.

Their deal with TVT records didn’t last long and the group disbanded from the label shortly after the group’s member Chris Black was arrested. 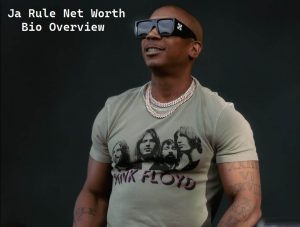 As a solo artist Ja Rule was featured on Mic Geronimo’s single Time to Build with DMX and Jay Z. In 1998 the labels started approaching him and he made a deal with Def Jam Records. Around the same time he appeared on legendary Jay-Z’s hit single Can I Get A….

In the following year, Ja Rule came up with the released of his debut studio album titled Venni Vetti Vecci in June of 1999 which became a massive hit on the Billboard 200 chart peaking at #1.

Rule gained further recognition with his second and third albums including Rule 3:36 (2000) and Pain Is Love (2001). Both of the albums became commercial hits selling over 15 million combined copies globally. The albums also earned 3x Platinum certification by RIIA and hit #1 on  Top R&B/Hip-Hop and Billboard 200 charts.

On the 19th of November 2002, Ja Rule released his fourth studio album The Last Temptation which would debut at number four on the Billboard Hot 100. That project sold over 237 thousand copies in its first week and also included two hit songs Th#g Lovin, and Mesmerize.

In 2003, under the Murder Inc. label, Ja Rule dropped his fifth album Blood in My Eye, spawning one hit single, “Clap Back”. The album peaked at number six on the Billboard Hot 200 and became a commercial success by selling over 139k copies within the first week of its release.

R.U.L.E. was his sixth studio album released in 2004 and earned Gold Status, selling over 30 million records globally. The album debuted at #7 and features the lead single, Wonderful, with R. Kelly and Ashanti. The song went all the way to the top 5 on the Billboard Hot 100.

Following the release of his sixth album, Ja Rule left Def Jam Records in the year 2005. He took a long break from the music industry from 2005 to 2011. Ja Rule returned to music in Feburary of 2011 and started recording his new album called Pain is Love 2.

Before the could release his album, the rapper was sentenced to tax evasion and gun possession for two years. The album was released in 2012 while Ja Rule was still in jail. In May 2013, he was finally released from prison.

In 2013, Ja Rule teamed up with rapper Irv Gotti and formed a label named Murder Inc Records. In 2014 he dropped Unruly: The Highs and Lows of Becoming a Man a memoir. In July of that year, it was announced by Ja Rule that he is ready to drop his eighth studio album but was pushed back to a 2016 out.

At the end of 2016, Ja Rule was featured on The Hamilton Mixtape which he showed his rapping skills for Hamilton’s verse in Ashanti’s single titled Helpless. Ashanti announced that she teamed up with Ja Rule for a collaborative album in June of 2018.

Ja Rule has established himself as one of the most prominent artists in the industry after releasing some breakout singles including Mesmerize, Wonderful, Ain’t It Funny, Always on Time, Holla Holla, Between Me and You, and I’m Real (Murder Remix).

Ja Rule also made a name for himself in the entertainment business and appeared in several movies in small roles. In 2000, Ja Rule made his film debut appearing in the action movie Turn It Up in which he played David ‘Gage’ Williams.

Since then he continued to appear in films including, The Fast and the Furious, Back in the Day, The Cookout, Assault on Precinct 13, and many more.

Ja Rule has worked with many stars in films such as Queen Latifah, Ving Rhames, and Pam Grier, among others. In 2013, he played the role of Miles Montego in the film I’m in Love with a Church Girl.

In 2000 Aisha gave birth to her son named Jeffrey Jr. Their second son Jordan was born in 2005.

After releasing his debut album, the only place Ja Rule could go was up, but in the late 90s, there was another up-and-coming rapper from Queens looking to make a name for himself known as 50 Cent.

According to both artists, their feud started for different reasons, 50 Cent believes it was because Ja’s, I’m hanging out with a guy in a club who had robbed Ja and 50 Cent stated, “I went over to stay, “What’s up Ja, and he acted like he had a problem with me, but I am not the one who robbed him.

On the other Ja admits to the story about the robbery but has other ideas as to why their feud spiraled out of control. He thinks it’s because 50 Cent was once snubbed by the label Murder Inc. on the set of Ja’s video for Murder for Life.

After that 50 Cent was signed the Eminem’s label Shady Records and this ignited a feud between both labels after Ka let Em know that he was going to take the signing personally. 50 Cent then released the diss track Life’s on the Line which took shot after shot at Ja and Muder Inc.

A few months later after Ja Rule heard that 50 was in the town and recording music at the Hit Factory in New York City, Ja rolled up with his crew to visit them. That was the result of which was 50 getting stabbed by Murder Inc rapper Black Child who was then arrested for assault.

50 responded with another diss track, meanwhile, Ja fired back with the track Losse Changed. 50 Cent then continued to respond with a couple of more diss tracks, but eventually, the beef finally began to lose steam. By May 2011 Ja Rule confirmed that fight was over.

In 2007 Ja Rule was arrested for gun and drug possession after his car had been searched by police. It was a trial that took a couple of years to get going but Ja eventually found himself serving two years inside prison. During his time in jail, he read a lot of books and got his GED, and packed up 40 pounds of muscle.

After an extension to his sentence thanks to tax evasion, Ja was finally released on May 7th of 2013. Soon after he started making moves to get a rise in 2014.

Despite all of this, the rapper also found himself involved in several troubles including Ja settling a lawsuit out of court in 2003 after buying a man in Toronto. From 2004 to 2006 he earned a lot of fortune and according to reports, failed to pay taxes on $3 million worth of revenue.

In April 2017, the agency announced Fyre Festival to take place in Hamilton in the Bahamas, a luxury party lives event. Ja Rule wound up facing the brunt of the internet’s righteous anger.

Ja and the co-founder of Fyre, Billy McFarland served a $100 million class action suit. Ja was eventually dismissed from the suit when the judge ruled over the case.

They decided that the plaintiffs were unable to prove that Ja’s promotion of the event on the social media pages, directly led to any tickets purchased. That cleared up a huge headache for Ja but at the same time, that’s a bit of a slap in the face.

The judge decided unilaterally that nobody cared about Ja Rule enough anymore to buy tickets to party with them.

The old enemy of Ja took notice of these events unfolding and started saving ammunition for a rainy day. 50 Cent’s and Ja Rule’s new chapter started from that point forward. Ja tried to stroke the flames by getting pity to sign off on a duel between the two rivals on a versus.

Ja Rule has a net worth of $7 million and his impressive fortune allowed him to live a luxurious lifestyle. The rapper owns a magnificent estate in Saddle River, New Jersey. This beautiful mansion spans 3,890 square feet of living space.

The home features 5 beds with 4 full baths, a gigantic kitchen that features a wood theme, and a massive living room. The rapper spent $1.875 million on this luxury house back in October 2001.

As of 2022, Ja Rule’s Net Worth is estimated to be around $7 million. He is one of the most popular rappers in the country and gained a lot of popularity through his hit music. The rapper made a $7 million net worth from his successful rap career.

He has sold over 30 million copies of his albums worldwide and 14.4 million units in the US alone. The majority of his income comes from performing,  sold-out concerts, as well as brand endorsements.

Some of his most popular songs are including Between Me and You, “I’m Real, Holla Holla, Ain’t It Funny, Always on Time, Mesmerize, Wonderful, and Always on Time. Ja also has a self-titled YouTube channel where he has over 1.2 million subscribers.

How much is the worth of Ja Rule?

How much money does Ja Rule make?

Ja Rule is making is more than $1 million annually.

What is the age of Ja Rule?