Nikki Sixx Net Worth is estimated to be around $55 Million US as of 2022. He is an American musician and songwriter who is probably well known as the bassist and the co-founder of the Glam Metal band Mötley Crüe. Nikki Sixx is one of the finest bassists in the 80s and the 90s.

Like many other popular celebrities, he also had his struggles before he earned his stardom as Nikki Sixx.  He has managed to gain such a massive achievement in the music world through his hit singles and participation in popular bands, such as Nikki was a member of the heavy metal band Sister.

Apart from that, he is also a professional photographer and radio host and has a successful solo career. So today we bring you a brief look back at his career, also the total Net Worth of Nikki Sixx his income, earnings, assets, luxury lifestyle, career, biography, personal investments, and more.

Nikki Sixx was born as Frank Carlton Serafino Feranna, Jr. on the 11th of December 1958, in San Jose, California, United States. His dad’s name is Frank Ferranno and his mother’s name is Deana Richards.

His parents divorced when he was very young, and he lived with his mom for a while before she abandoned him. After that, he moved in with his grandparents and had to relocate to many locations.

By the time he was a teenager, he found himself in several crimes like robbery, vandalism, living on the streets, and also turned to drugs. During that time his grandparents sent him to his mother because of his bad behavior.

Growing up Nikki was increasingly intrigued by the Rolling Stones as well as the 70’s Glam Rock, and heavenly Metal Bands including, The Sweet, New York Dolls, Aerosmith, Cheap Trick, Kiss, and Alice Cooper, and other Headbangers of the 70s.

After realizing his growing passion for metal and rock music, Nikki decided to pursue a music career and shifted to Lose Angles for better opportunities. That was the time when he only had one beaten-up bass guitar, which he had purchased by selling the old six-string he had robbed.

After moving to this new city at the age of 17, he started working several dead-end jobs to support himself financially, while gradually improving his bass talents and auditioning for different bands.

Soon after he was hired by a heavy metal band called Sister, led by Blackie Lawless who would later join W.A.S.P. Just after recording a demo, Nikki was fired from the band and he then joined another heavy metal band named London Afterwards.

At that time he changed his name to Nikki Sixx and went on to collaborate with guitarists like Mick Mars, drummer Tommy Lee, and a singer Vince Neil, to the worldwide popular band Mötley Crüe.

Ever since the band broke up in 2015, Nikki has been keeping himself busy. In June 2018, He dropped his third book The Heroin Diaries, where he discussed his struggles.

Being the face of the famous band Mötley Crüe for more than 20 years and hosting the nationally syndicated rock radio show, Sixx Sense, and numerous other musical acts, he gained global stardom.

Despite all of this, in 1981 Nikki Sixx released his debut album Too Fast for Love under his label Mötley Crüe. Soon the band grabbed the attention of the audience and they dropped their second album.

In the year 2000, Sixx formed the project ’58’ along with other artists, and soon the band released their first album called Diet for a New America. Nikki Sixx also established his band called Sixx: A.M. which is an audio accompaniment to his autobiography.

Finally, in May 1989, Nikki Sixx married a Playboy Playmate model, Brandi Brandt. The couple together has two sons and one daughter. Due to some reasons, in November 1996, they decided to get divorced.

In the same year, Nikki married his 2nd wife, Donna D’Errico who is an actress and also a Playboy playmate. They have a daughter together named Frankie-Jean Mary Sixx. They got divorced in June 2007. Later he found another love and married model Courtney Bingham. 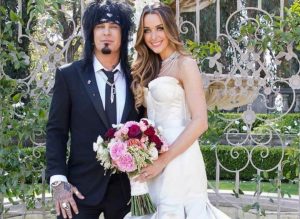 Nikki Sixx is among one of the richest musicians on the globe and he has been able to buy expensive things. In July 2014 he bought a lavish mansion for a whopping 4.25 million dollars. The house is located in the beautiful city of Los Angeles suburb of Westlake Village and it spreads 10,300-square-foot.

The mansion has six bedrooms and eight bathrooms with lots of other features including, a family room wet bar, a modern kitchen, and a lavish swimming pool, with a breathtaking view from the balcony. According to some reports in September 2021, Nikki Sixx sold this home for $5.18 million.

Apart from that he also has some other properties such as he listed his former mansion in Calabasas for sale for 2.399 million dollars which he bought in 2011 for $1.89 million.

As of 2022, Nikki Sixx Net Worth is roughly $55 million US. He is one of the richest and highest-paid musicians in the world and has already earned a lot of fame in the music world. He has gathered such a massive fortune from being in the heavy metal band and record label, as well as the radio, shows.

He made a huge name and fame in the music industry without taking help from anyone. Apart from the music industry, Nikki Sixx has heavily invested in many real estate properties in which he earns a good sum of money.

Nikki Sixx’s annual salary is a whopping $10 Million. A big part of his wealth comes from his clothing line Royal Underground, which he introduced with Kelly Gray in 2006.

How old is Nikki Sixx?

How much does Nikki Sixx make in a year?

What is the worth of Nikki Sixx?

What is the real name of Nikki Sixx?

How tall is Nikki Sixx?

Hey everyone, that brings us to the end of this post, if you liked this where we talked about Nikki Sixx Net Worth and his Biography. Then just share this type of work with your friends and your social media forms, whoever enjoys the lifestyle and the Net worth of their legendary stars. We like to read your discussions plus your replies and we will give a perfect full story to you. Thanks.