Ralph Tresvant Net Worth: Ralph Tresvant is an American singer, songwriter, actor, and record producer, from Roxbury, Massachusetts who has a net worth of $8 million US as of 2022. He rose to fame after becoming the lead singer of the popular R&B group called New Edition.

It was in 2008 when Ralph teamed up with Bobby Brown and Johnny Gill to form a new band known as “Heads of State”. He is also the founder of the Rated R Records label as well as a record producer who has worked for several hit singles. In 1990 Tresvant decided to debut as a solo artist and dropped the album titled Ralph Tresvant which has managed to sell more than 2 million copies worldwide as well as certified double platinum.

His music style helped him to grab the attention of the entertainment industry and later provide vocals on the soundtracks for multiple movies. He has also starred in several films both with the band New Edition and solo. In addition to his work as the lead vocalist of New Edition, Tresvant also became the DJ on The BASS of Boston’s show called WZBR 1410 AM.

In 1991 Ralph Tresvant earned a Grammy Award nomination as well as won a Billboard Music Award in the category of the best new male pop performer. So in this post, we are going to talk about the total net worth of Ralph Tresvant his income sources, career, biography, and a lot more.

Ralph Edward Tresvant was born on the 16th of May 1968 in the Roxbury neighborhood of Boston, Massachusetts. He was raised by parents Patricia Tresvant and Ralph Hall. Tresvant grew up alongside two younger siblings Andre and LaTonya.

While studying in high school he became the close friend of Ricky Bell, Bobby Brown, and Michael Bivins, and the trio began performing at local talent shows from an early age. During that time they were discovered by a local up-and-coming producer and composer, Brooke Payne who later helped them to pursue their music career.

Ricky, Bobby, and Michael got the opportunity to audition for Brooke Payne and he gave them the title known as New Edition, signifying that they were the new edition of the Jackson 5.

They quickly grabbed the attention of Maurice Starr who signed them to his own record label called Streetwise Records. Maurice desired to make a “newer edition” of the pop act The Jackson 5 with the help of this group. Later another Ronnie DeVoe (Payne’s nephew) decided to join the group as a fifth member.

In 1983 New Edition finally came up with the release of their debut album titled Candy Girl. The project became successful and features some hit singles including  Popcorn Love, Is This the End,Jealous Girl, as well as the title tune.

New Edition eventually left the management and record label of Starr’s after a money dispute and they immediately made a major record deal with MCA Records. Under the deal the group released their second Ralph Tresvant’s self-titled album which earned them even more popularity and went double platinum and sold over 2 million copies worldwide.

The album’s lead single called Sensitivity hit the R&B charts by spending more than 20 weeks in the United States as well as 2 weeks at the top of the charts. The song was also featured in the video game entitled Grand Theft Auto: San Andreas. The album also features the Top Five hit tracks.

Tresvant got an offer to provide vocals for the soundtracks of the films such as Mo’ Money and The Preacher’s Wife. He then made his guest appearance and recorded two singles for the soundtrack for the popular urban comedy film titled House Party 2.

Ralph Tresvant came up as a solo artist and dropped two more albums after releasing his 1990 self-titled debut project. His second album It’s Goin’ Down was released in 1994 followed by his third album Rizz-Wa-Faire in 2006. As a solo, Tresvant also starred in films including Jake in Barbershop Blues (2004), Sonny in Triple Cross (2006), Behind RizzWaFaire (2008), Sam in Cooke in Get on Up (2014), and Girls Trip (2018).

In September of 2008, Tresvant started his collaborative tour with Bobby Brown and Johnny Gill and they began performing in the new group Heads of State. Apart from just being a singer and actor, he also works as a radio show DJ on Boston’s WZBR 1410 AM The BASS. In late 2016 his show “Inside the Ride with Ralph Tresvant” debuted.

Relph Tresvant married his childhood girlfriend Shelly in 1993. The couple had two daughters together namely Mariah, and Na’Quelle. According to some reports Shelly was a drug addict while Tresvant was a playboy.

Their relationship did not last long and they finally divorced in 1996. They also have a son  Ralph Tresvant Jr. before the couple separated their ways.

On September 18, 2004, Tresvant married his longtime fan Amber Serrano who is a virtual artist and creator of visual art. Moreover, Amber is the owner of Divine Inner Vision agency and made her appearance in the popular comedy film House Party and the music group’s documentary called The New Edition Story.

The couple welcomed their first child a son named Dakari. Dakari is the only son of Tresvant and Serrano and the family is living their luxurious life in the beautiful place of Woodland Hills, California, the United States. 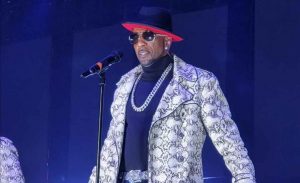 Ralph Tresvant has a net worth of a whopping $8 million and the singer has been able to spend millions of dollars on expensive properties and luxurious cars.

Aside from having a house in Woodland Hills he also purchased a lavish mansion located in one of the post areas of Acworth City in Georgia. Tresvant is fond of cars and his garage is full of cars such as Mercedes Benz and many more.

As of 2022 Ralph Tresvant Net Worth is estimated to be around $8 million. New Edition, live concerts, and different radio show projects are the main source of his income which he already earned a good sum of money. Tresvant’s appearance in the films also helped him to amass a vast chunk of money for himself.

As a solo, he released several hit singles and his attractive music style became the defining element for the New Edition ensemble. Ralph Tresvant’s annual income is approximately $1 million.

What is Ralph Tresvant net worth?

Ralph Tresvant net worth is $8 million as of now.

How much money does Ralph Tresvant make?

How old is Ralph Tresvant?

Ralph Edward Tresvant was born on the 16th of May 1968 in the Roxbury, Massachusetts, he is 54 years old.