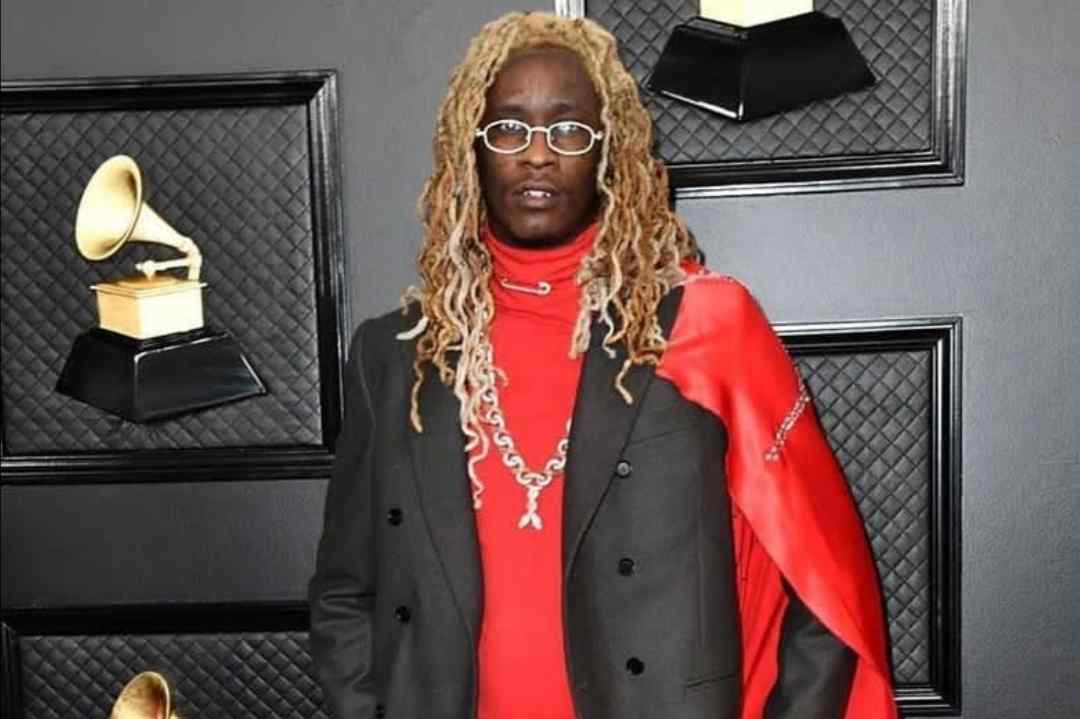 Young Thug Net Worth and Salary: Young Thug is a very popular American rapper, singer, and songwriter, who has a net worth of $8 million US as of 2022. He is famously known for his unique musical style and his distinct fashion sense that some might see as a bit eccentric. But the success he’s found in the world of hip hop has turned him into one of today’s hottest musical commodities with his net worth estimated to be around in the range of $8 million.

Thug has collaborated with numerous legendary artists in the music industry and became a fan favorite among enthusiasts of the trap genre, after teaming up with them. He has worked with popular rappers such as Gucci Mane, Birdman, and Rich Homie Quan. The man generated quite the buzz for himself in 2013, and was invited to be on the cover of XXL’s 2014 Freshman Class, but didn’t show up for the shoot. In this post, you will find the total net worth of Young Thug his salary, income sources, music career, biography, luxury lifestyle, car collection, assets, jewelry collection, and a lot more.

Young Thug was born as Jeffery Lamar Williams on the 16th of August 1991, in Atlanta, Georgia, United States. He grew up in the section 8 housing in the South Projects and was the second youngest of 10 siblings. That’s a lot of mouths to feed for his mom who had four or five different baby daddies. Around 2000, one of his older brothers got shot and killed outside their home over a gambling dispute, and this was in front of Thug’s eyes.

While another brother went to prison for murder. He didn’t have an interest in school so he started getting involved in various crimes, drugs, and gambling. While in middle school he broke his teacher’s arm and got thrown into juvenile detention for four years. Later he continued to gamble smoke with his brothers and occasionally smashed. Thug became the father of a child when he was only 17 years old.

Young Thug wasted no time in making some tracks and once he was done Juvie, he started rapping more often. In 2010, he began recording but genuinely had nothing other than a few shirts and some shoes to his name. He first appeared as a guest artist on one of TruRoyal’s songs titled She Can Go. In 2011 he took his music career more seriously and dropped the mixtape I Came From Nothing, which started circulating the Atlanta area and generating a lot of buzzes.

His eccentric personality and unique sound found him some big admire quick and grabbed the attention of prominent rapper Gucci Mane who later contracted him to his 1017 Brick Squad records label in 2013. He released his next mixtape 1017 Thug, which was celebrated by critics. He then began collaborating with some famous rappers such as Travis Scott and Waka Flocka Flame.

In 2014, Young Thug signed a management deal with Birdman Cash Money Records. Thug has gone on to collaborate with A$AP Ferg, Kanye West, Chief Keef, and Rich Homie Quan, and he released a handful of mixtapes. In 2015, he dropped another mixtape Barter 6 with Atlantic records, which quickly became successful by reaching #22 on the Billboard 200, #24 on the UK R&B album charts, and #5 on the R&B hip-hop charts. 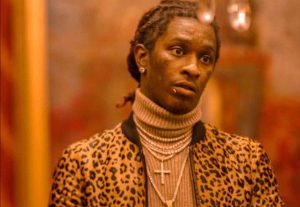 In the following year, Thug released his second commercial mixtape I’m Up which peaked at number 22 on the Billboard 200. Slime Season 3, was the third mixtape that was released in the same year and it debuted at #7 on the US Billboard 200, and #1 on the US Rap Albums Chart. In 2017, Thug teamed up with the Cuban pop singer Camila Cabello for the hit single Havana which became the biggest breakthrough song of his career.

The song became his first number 1 single and ranked #1 on the Billboard Top 100. In 2018, Thug provided backup vocals and co-writing for Childish Gambinos’ This Is America, which again came at the top of the charts.

On August 16, 2019, Young Thug came up with the release of his debut studio album titled So Much Fun, which features guest appearances from legendary artists including, Lil Baby, Lil Uzi Vert, 21 Savage, Quavo, Juice Wrld, Future, Machine Gun Kelly, Gunna, Nav, J. Cole, and Travis Scott. The album became a massive hit by peaking at number 1 on the Billboard 200 Chart in the US.

In the same year, he released the hit track The London in a collaboration with American rappers Travis Scott and J. Cole. The song charted at #12 and 11 on the Billboard Hot 100. His second single from the album, “Hot” also became successful. In 2020, Young Thug and rapper Chris Brown dropped their collaborative mixtape Slime & B. One of the songs from the album titled “Go Crazy” went viral as the main track peaked at #3 on the Hot 100 and made Thug’s highest-charting hit as a lead artist.

At the end of 2021, he was featured alongside Future on Drake’s single Way 2 Sexy, which pulled him to #1 on the Billboard Hot 100 for the third time in his career. On October 15, 2021, Thug dropped his second studio album Punk which debuted at #1 on the Billboard 200. After the release of this album, Thug made a global publishing contract with Kobalt Music Group.

In 2019, Young Thug won the Grammy Award in the category of Song Of The Year for his single This is America.

Young Thug has 6 kids from 4 different women which include three daughters and three sons.

In early 2015, the rapper began dating Jerrika Karlae who is an entrepreneur and the owner of the Swimsuit line. In April of 2015, the two got engaged.

Apart from that, the rapper was previously in a relationship with Amy Luciani.

Young Thug is one of the top American celebrities who is known for his fashion trends. According to some reports, the rapper has earned an estimated $1.5 from the brand promotions and advertisements. He has been featured in various commercials for brands such as Hooters, Sprite, Calvin Klein, Puma, and more. He’s been endorsing these brands on different social media platforms such as Facebook, Instagram, Twitter, etc.

After being successful in the music industry, he’s bought each of his siblings not only a house but a luxury car as well. His success allowed him to buy a mega-mansion in the Elite area of Buckhead that looks like a place. The big mansion consists of 11,000 square feet, 7 bedrooms, 11 bathrooms, an indoor pool, 4 car garage, and a whole lot more. The per month rent of the luxury house is around $15,500. In 2016, he bought this property for $2.4 million. Apart from that, Thug also owns various real estate properties in the country.

Thug is the owner of many expensive cars which include, including the Corvette C8 Convertible, which costs $68,000, and Rolls Royce Cullinan, he bought two Cullianns the white one for him and the black one for his best friend Gunna. The two cars cost him around $1 million. 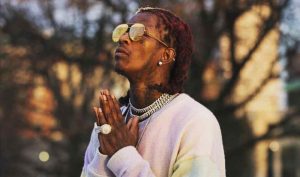 As of 2022. Young Thug Net Worth is approximately $8 million US. He first received attention for first collapsed with rapper Gucci Mane and Birdman then moved on to work with artists like Gunna and Lil Baby. Aside from his singles and mixtapes, he also got some popularity for appearing on the hit songs like Havana by Camila Cabello and it ended up his first number-one single on the Billboard Charts.

The rapper said during the quarantine he lost an estimated to be around $5 million since he was supposed to be touring. On Spotify, Thug is currently holding the spot for the 125th most streamed artist in the world, which leads to some pretty big numbers for the bank account. The Atlanta rapper is earning over $80,000 per month, just for streaming royalties from Spotify. That brings his total to just $1 million per year, $19,000 per week, and $2700 per day.

Apart from that, the rapper is making a massive amount of money from other sources such as his YouTube channel where he has over 50 million views per month. In a single year from YouTube streams alone, Young Thug is earning around $1,620,000 per year. On average including live concerts and streaming royalties, Young Thug’s annual income is more than $4 million. Thug has an expensive jewelry collection which includes a $62,000 Rolex. Over the last few years, Young Thug’s net worth is growing regularly.

How old is Young Thug?

How much does Young Thug make?

On average including live concerts and streaming royalties, Young Thug’s annual income is more than $4 million

How much money does Young Thug have in his bank account?

Young Thug is a very popular American rapper, singer, and songwriter, who has a net worth of $8 million US as of 2022.

What is the real name of Young Thug?